skip to main | skip to sidebar

I’ve wanted to change out one of the bathrooms for quite a while. It was an orange wallpaper nastiness when I first moved in. We promptly ripped all that out and made it pretty. We painted it a light beige top, green bottom, and a shimmery flower wallpaper border in the middle. I loved it when we did it. 15 years later, I was tired of it. 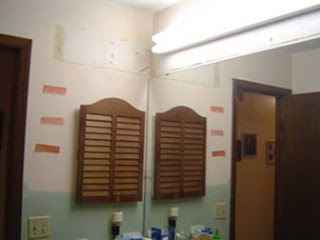 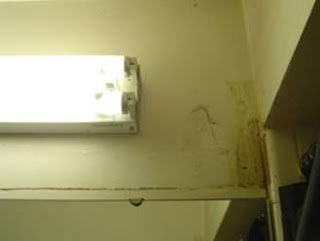 Also notice the disfigured wall by the light. There had been large wooden beams making a frame up there. They were attached the wall, and then had plastic across it so you could not see the ugly utility light that was the main bathroom light. That was a challenge to take down! And then, of course, the wall looked nasty where the beams had been.

When I took down the fluorescent light, I discovered the light box was not in the center as we had expected. It was all the way over at the left end of the light. In fact, the “light box” was merely a hole in the wall with the wires coming out. There was no box at all, nor was it located anywhere near the beams that could support holding a box. As the new light was designed to attach to the light when it was installed, this was a problem.

Messing with electrics is not at all my forte, and it makes me very nervous. Having a bathroom with no light at all was even less appealing, however. So, I checked the wires, and discovered they could just barely reach to the middle of the wall where I wanted to put the new light. I punched a big hole into the wall and used this pvc light box that has clamps that expand to hold it into place without having to attach to beams. Alex and I stretched out an old wire coat hanger (good thing I still had one in the closet!) and used it like a shepherd’s hook to wrap the wires around the hook and drag it through the wall to the new hole. That was quite a challenge!

After patching up the original hole, I painted the bathroom and then installed this new light. Doesn’t it look so much nicer? 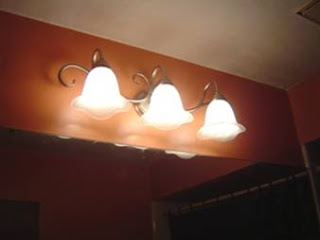 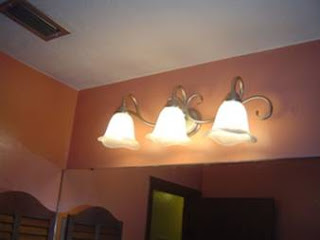 I still need to either replace the mirror or do something to cover where it is eroding along the edges, but I’ve got to do it as I have the time and funds. The visual difference of just the paint and light change is really amazing and cheers me up immensely. Now I’ve got to do the same thing to the other bathroom! At least I will be prepared for the level of difficulty in changing the light fixture for this round.

Sandi
This blog is a fun "digital scrapbook" of life. It would be even more fun if I posted more regularly! Current critter count: 1 child, 2 dogs, 3 cats, a snake, and fish.